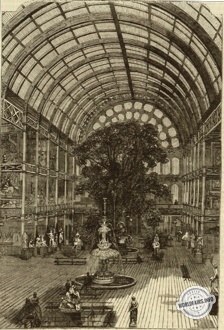 In the middle of the building is the Transept; it separates the English Exhibition from the other parts. Above, and as if in a dome, are bluish glasses which cast a soft, tender, and almost fantastic glow on the interior by the play of reflections which seem to fall from the vault.

In the middle rise, with all their luxuriant audacity, two trees which do not reach the top and which spread out proudly, spreading their shadows over the crowd.

Next to the trees are tropical plants that have retained all their greenery and beauty.

Three fountains of gushing water are placed at intervals to refresh the walkers.

Groups of sculptures are skilfully distributed along this long promenade.

One can notice :
1° The equestrian statue of Queen Victoria;
2° The one of Prince Albert;
3° A Warrior from the time of Cromwell;
4° Love and Psyche;
And finally several other pieces of very remarkable sculpture.

A large number of objects from various nations are on display. First of all, from the East, the fabrics of the Indies are spread out with taste, here and there, stretched out, tied, and forming knots whose ends fall back with great elegance.

Vast cupboards, richly decorated, contain fabrics which are in view of the visitors.

Then, not far from the fabrics, one sees Indian boats, nets, a complete fishing and navigation equipment.

In one of the side parts of the Transept, where the Exhibition of English products begins, English fabrics can be seen.

Not far from there are bronze and marble statues, among which one can admire the one of Venus disarming Love.

Finally, some objects exhibited by China are placed as if to decorate the Transept.

It is impossible to get an idea of the surprise one feels on entering the Crystal Palace; but it is especially in the Transept that admiration is expressed loudly and without restraint.

We have learned with a pleasure that our readers will no doubt share, that soon M. Albert Lenoir, one of our most eminent architects, will have a view of the Palais de Cristal rediscovered in the Bazar Bonne-Nouvelle, in real life, and by an optical effect that will leave nothing to be desired in terms of illusion.

We have taken our measurements; and we shall very shortly publish a vignette made with the greatest care which will represent the Transept exposed in polyorama.

The plan which the skilful architect has chosen is designed to give the mind complete confidence: one will think oneself transported to the Palace in London.

The architect places the public in one of the bays leading to the Transept; and one sees this beautiful part of the Exhibition boldly unfold before one.

As for the exterior, which is accurately represented in our vignette, it is easy to see how boldly the immense façade of the building is produced.

It is here that the curious crowd that all parts of the world have sent to this festival of industry is amassed; it is here that a unanimous sympathy for the first thought is developed in all its expression, before the crowd enters and comes to admire the products of the outside; It is here, finally, that this industry which unites from all points of the globe realizes, in principle, the alliance of arts and industry which, on the very threshold of the Palace, outside the Transept, is bound together in advance by the expression of a common admiration.