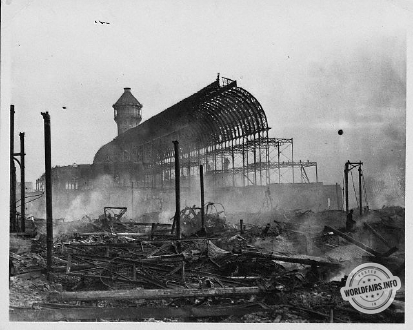 The fire started in the centre of the transept at about 7 p.m. on 30 November 1936. Then, after learning of the seriousness, the fire brigade was called, and the first fire engine arrived at about 8 pm.

After a night of trying to extinguish the fire, 88 fire engines, 438 firemen and 739 policemen could do nothing. By early morning, there was nothing left of the building.

The cause of the fire remains unclear, the only certainty is that given the size of the building and the amount of flammable products exposed, such a fire could not be contained.