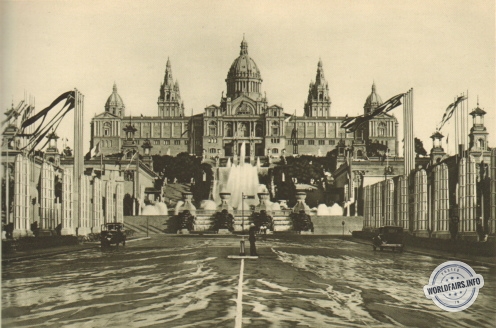 It was the largest and richest of all the buildings at the Exhibition. Intended to represent "Art in Spain", it had been designed and executed to suit the artistic value of the works that were to be exhibited there.

It had a covered area of 32,000 square metres and a height of 19 metres. It consisted of two floors fitted out as exhibition rooms and basements reserved for the Prehistory Section.

The large festival hall on the upper floor alone measured 5,000 square metres and could hold 20,000 people.

As previously mentioned, this Palace was used to present "Art in Spain (Archaeology and Fine Arts)". This grouping was undoubtedly one of the most important at the Exhibition. It evoked the particular atmosphere of the different periods and reflected the characteristics of Spanish art throughout history by means of collections of authentic objects grouped in museum rooms and some reconstructions of the most remarkable periods of national life.

For this purpose, the heritage of the State, the Church, the Army, public corporations and private individuals was used. Each object was accompanied by an information sheet that described its history and origins, as attested by renowned specialists and experts.

This masterly summary of Spanish history began with the primitive periods and the colonisation of Iberian soil; it then went on to mention the Arab civilisation; the epic of the Reconquest; the most glorious exploits of Castile, Aragon and Catalonia; the Catholic Monarchs; Charles V and his empire; the Golden Age and Neoclassicism; the inauguration of the first Spanish railway; the Romantics and, finally, the revolutionary era of Queen Isabella.