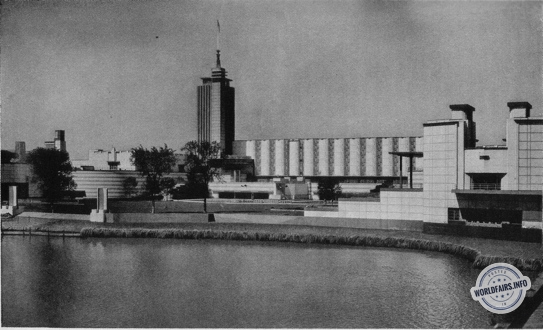 With the achievements of science being the main theme of "A Century of Progress", it is fitting that the Temple of Science should be the core of the Exhibition. Located just south of the Administration Building with its 176-foot tower, complete with chimes, pointing skyward, the structure is one of the most impressive in the entire exhibition.

This massive building, 700 by 400 feet, is U-shaped, and joins on three sides a courtyard capable of seating 80,000 people. The open end faces the magnificent lagoon, Northerly Island and Lake Michigan beyond. The overall effect of this temple of science is one of order and above all massiveness, with the carillon tower on the southwest corner being one of its many assets.

On the ground floor and near the main entrance at the north end of the Hall of Science is a magnificent display of medicines and medical specialities. The breadth and comprehensiveness of the exhibition inspires and provokes a view of increased respect for the progress made in this phase of medical science.

The northern end of the building is reached by a gently sloping ramp which leads to a large circular terrace, the southern boundary of which is a row of powerful pylons which rise more than 50 feet above the terrace. In the centre of this upper terrace is a circular shaft, the base of which forms the ground floor courtyard, part of which is occupied by the drug display.

In the centre of this courtyard is a fountain surrounded by ponds and flower gardens, while to the west is the section housing the basic science exhibition. On the main floor is a large room of the following proportions, 260 feet long, 60 feet wide and 57 feet high. The inscriptions on the walls pay tribute to the torchbearers of science and list the major achievements.

Another large part of the Hall of Science is devoted to medical exhibits. Progress in the cause, detection, treatment and prevention of human and animal diseases are represented by numerous posters.

The Institut Pasteur in Paris and the Koch Institute in Berlin show exhibitions of historical and fundamental importance. The Deutsches Museum presents exhibits from Dresden of human physiology and constitution, while London's Wellcome Museum shows advances in British surgery and medicine. The American associations are well represented with displays that present the lines of progress in medicine. Then there is the "transparent man" (or glass man) which shows the functions of the human body parts.

Other articles are devoted to biology, chemistry, geology, mathematics and physics. The novel of gas and oil is told; refraction of light by prisms and lenses, coloured effects produced in different ways, and significant spectra are displayed, mechanical mathematics, is demonstrated, and many other interesting elements of everyday life, unimportant to the neophyte, are represented in an interesting way.

The south-west corner which houses the carillon is a sight to behold at night when thousands of neon tubes hidden in the walls are lit. The hours of the day are announced by the tower's chimes.