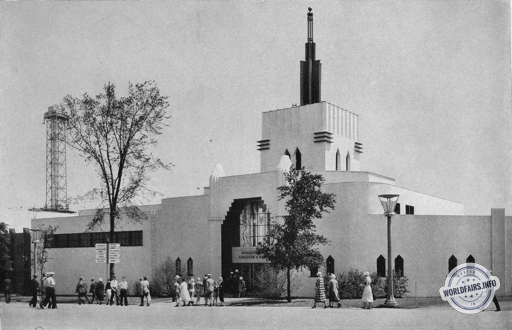 Modern in design, though ecclesiastical in atmosphere, the Hall of Religion within the exhibition is highly significant of the efforts made to present a well-balanced programme.

Believing that progress is impossible without religion, a committee was appointed by Rufus C. Dawes, president of the Exposition, five years ago to construct a religious display that would be in harmony with the theme of a century of Progress.

The Hall of Religion, located just southeast of the General Exhibits group, is the result.
This large, imposing building, with its beautiful stained glass windows, pipe organ, assembly rooms, small and many other interesting features, presents an expression of courtesy and cooperation between the various religions rather than competition.

The spirit of peace is the spirit of the hall, and the spirit of belief is submerged in human service.
The building was built with contributions from some Protestant, Jewish and other denominations. It contains a chapel for meditation and a meeting room with a capacity of about 500 seats for small religious conferences.

There are many posters presenting religious organisations.
The walls of the rotunda are covered with decorative texts of the words of such great religious leaders as Jesus, Buddha and Isaiah.

Priceless religious antiquities, including some of the earliest printed Bibles, are displayed in another part of the building.

The display of some stained glass windows, including the most prominent of those recently forged by Charles Connick of Boston for the Presbyterian Church in downtown Pittsburgh, is more than attractive.

Among the most prominent churches participating in the exhibition are Jewish, Lutheran, Methodist, Presbyterian, Episcopalian, Baptist and Christian Scientist. The Christian Science Monitor, the church's daily newspaper, has its own building nearby.