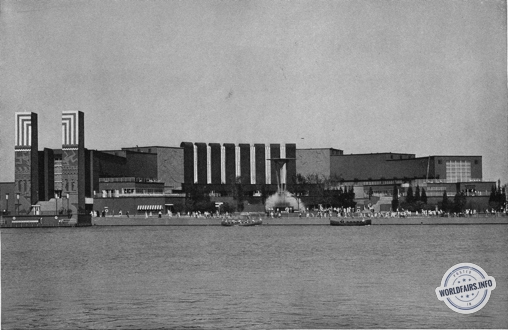 It is located south of the lagoon's shoreline, on the north island, next to 12th Street. You enter through a circular courtyard above which rises a silver fan glowing with light.

In the courtyard, a fountain sends out multicoloured jets of water. Around the centre of the fountain is a 23-metre high arch.

The underside, made of hammered, chrome-plated copper, reflects and diffuses the colour, creating a spectacle of exceptional beauty.

This is the courtyard of the Palace of Electricity.
The large building itself, in the semicircle behind the courtyard, connects with the Radio and Communications Palace. A group of pylons stands on either side of a giant bas-relief, 13 metres high, on which figures of gigantic size are carved, as if to suggest the enormous force they symbolise.

One represents atomic energy, bearing the inscription: "Energy is the substance of all things, the cycles of the atoms, the interplay of the elements are in forms moulded as by a mighty hand to become the foundations of the world.

The other panel symbolises stellar energy, and bears the inscription: "Light is the beginning of all things. From the greater ether it emits, forming the stars, responding in its patterns to the majesty of creative thought."

There is an entrance here, which leads to a large circular room.
Another entrance is on the west side of a walkway, flanked by two huge pylons over 33 metres high, and a wide staircase leading to the hall. This walkway provides access to the palace for visitors coming from the mainland by water across the lagoon.

These pylons are also carved with figures. There is Light on the northern pylon, and Sound on the southern pylon.
In the large halls, twenty companies share the large hall, with a wide variety of exhibits, such as the latest inventions and innovations.

For example, an incandescent light no bigger than a grain of wheat, a wonderful aid for surgeons, or the largest incandescent lamp in the world, with 50 kilowatts.

Under the glass floor, a section of the world's largest hydro-electric generator model is presented in a flood of light.

Again, this is a huge model of a transformer, the largest ever built. There are various displays of electrical equipment and lighting effects, model kitchens, model laundries.

Models of large liners are paired with an open model of the electrical equipment that powers these liners.

An incredible diorama
On the mezzanine, the world's largest diorama tells you an exciting story. Suddenly, the 30-metre long stage comes to life.

The rivers begin to flow, the turbines begin to turn, through the lights of the plains, the ranch and the houses glow in the twilight; the city comes to life, the streets soaked with activities inspired by big industries, tall skyscrapers, houses and hospitals, shops and factories, theatres, churches, trains and subways.

Steam from the power station, and trains running; an airport, and the coming and going of live planes.
On another city, coal mines, quarries, and many other phases of industry used to produce electrical energy.

A voice speaks from the darkness, explaining the whole process. And so you get the history of electricity from its generation to its consumption.

The first hydroelectric plant in the United States was built in 1883, near Appleton, Wisconsin!
Other striking exhibits you can see on the second floor are life-size, such as the rooms in houses, showing the many uses of electricity in the home; farm buildings, showing the use of electricity on a farm, from destroying insects to filling the silo and powering the machinery. Five model shops tell a graphic story. The electric furnaces that made the use of cast iron possible, and other manifestations of the applications of electricity to energy, heat and light in industry are represented.

A neon display
In the space under the balcony you will discover the process of filling neon tubes with rare gases which creates a bright coloured light, as what you can see for the exhibition lighting is now used extensively for advertising.

An electric fountain features this lighting and 3 striking demonstrations of lighting effects foreshadow the future possibilities of this form of lighting.