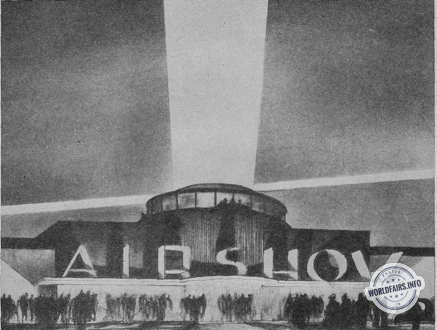 Modern airliners in all their power and luxury, and those that have made aviation history over the years, are brought together in this aviation exhibition, which is located in the north of the Transport Palace.

The construction of the modern multi-engine airliner, the structure of its cabins and wings, and the safety equipment, comfort and enjoyment of passengers are presented in large aircraft that visitors can tour and inspect.

The historical exhibition contains aircraft such as the Wright Model "B" machine, the first commercial model built by the Wright brothers; a Bleriot monoplane, an aircraft identical to the one in which Louis Bleriot made the first flight across the English Channel in 1909; the 1913 "Laird" aircraft in which Catherine Stinson flew over China and Japan in 1915; and the Bellanca aircraft, "Columbia", in which Clarence D. Chamberlain flew to
Berlin in 1927.

A "Jenny", the type JN4 in which American airmen trained for the First World War, the exhibition also includes models of Spad, Nieuport, Fokker and Sopwith. This and other collections throughout the building were assembled in collaboration with the Roosevelt Field Museum and the Smithsonian Institute of Washington, D. C.