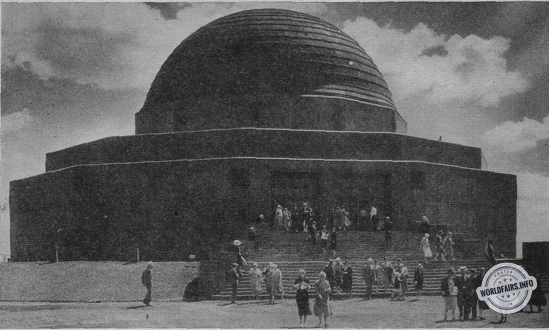 The universe, in all its grandeur, is reviewed under the Adler Planetarium Dome and Astronomical Museum. Located in the "A Century of Progress" exhibit on the northern tip of the North Island, this magnificent structure, built of Minnesota granite, is the only one of its kind in the world.

Donated to the City of Chicago in May 1930 by Max Adler, one of the financiers of A Century of Progress, this dodecagonal building with its bronze medallion outer corners with plaques of the twelve signs of the Zodiac proposes to "promote the progress of science; to guide to the understanding of the majesty of the heavens; and to emphasize that beneath the celestial firmament there is order, independence and unity", according to its statement of purpose on a plaque at the entrance to the building.

After entering the main hall, the visitor sees above him a dome-shaped, white ceiling almost 30 metres in diameter; the ceiling, which only a moment before looked like a bare white vault, now depicts a deep blue sky, then the blue sky is dotted with twinkling stars and a voice explains all the wonders of the heavens.

Capable of the most delicate adjustments, the mechanism can show viewers what the sky was like when Christ walked this earth, what Galileo saw when he studied the heavens, or how the North Star will look in a thousand years. The operator can show them how the stars appear in the tropics, show constellations they have never seen before, or locate the viewers at the two poles where the celestial bodies simply swing in circles.


More than 4500 planets, planetoids and stars are seen in the journey on their orbits. The dimly lit sky resembles a clear night sky, and moments later, the viewer loses his or her bearings, forgets the enclosure and becomes completely immersed in the clear sky.

The building, costing over $1,000,000, contains an astronomical museum and a library. Dr. Philip Fox, former professor of astronomy at Northwestern University, is the technical director.