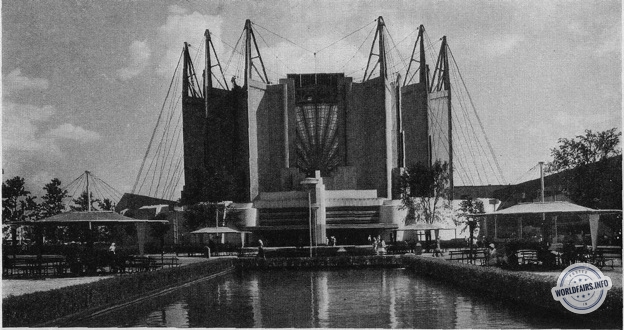 The "dome hanging in the sky" of the Palace of Travel and Transport is suspended from twelve steel towers 40 metres above the ground, and changes the overall architecture of this World Expo.

The roof is made of metal plates suspended by steel cables which are held by twelve reinforced concrete towers placed in a circle.

This was the first time that the principle of the suspension bridge was applied to architecture on this scale.

The magical spectacle of a century of transport, which is in reality the story of a century of progress, is presented in and around this great dome, which in all probability will be the most talked about of all the architectural surprises of the Exhibition.

The reason for the bold use of this suspension principle was to provide a large, clear and open space for the exhibition. The dome is made with joints that allow for expansion and contraction during temperature variations, which can cause a variation in circumference of over 20 cm. The roof can rise or fall, depending on the amount of snow, rain or other form of pressure on it, this movement of the dome gives part of its name, "it breathes."

In the dome, which has an inner diameter of 70 metres, the history of transport was presented. The exhibition features the first automobile that ever operated on the streets of an American city and a comfortable and fast limousine of today, a reproduction of "Rocket", early locomotives that proved to be practical and powerful and steam engines of today's freight, and the latest and fastest: the multi-motorized passenger aircraft of the present day.

This dome, however, occupies only a small area of the total area covered by this palace. The other part of the building is located to the west of the dome. This section of the exhibition is more than 300 metres long, 30 metres wide and 12 metres high, with two floors but no windows. This gigantic structure stretches from north to south and features displays on the automobile, railways, airlines and shipping companies. A section directly towards the main entrance is called the Great Hall.

Its barrel-shaped dome is 26 metres high, while the ground floor has dimensions of 73 by 30 metres.
The entire building is a huge transportation show, where the American history of travel from the last 100 years to the present day is presented and where Lake Michigan is the "backdrop" for the stage.


The show, "Wings of a Century", features 200 actors, 70 horses, a dozen locomotives, boats, wagons, stagecoaches, numerous automobiles and some aeroplanes.