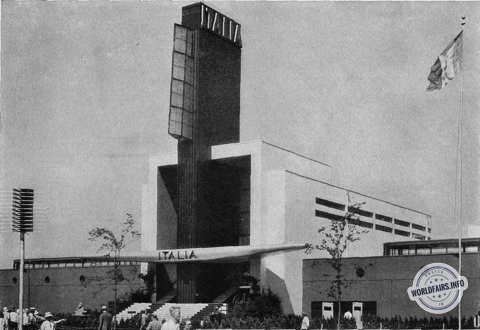 On 5 September 1932, the Italian Consul General was received by Prime Minister Benito Mussolini in Rome at 8.30 p.m. and within five minutes, Italy officially decided to participate in the exhibition "A Century of Progress".

A programme was built in the following minutes, divided into four parts:

First, the construction of the Italian pavilion, which is located to the north-east of the Hall of Science. It was designed by the three Roman architects, Libera, Valenti and Direnzi, and the construction was entrusted to Alexander V. Capraro, an architect from Chicago. The Italian government appointed His Excellency Prince Spada Ludovico Potenziani, a senator of the Kingdom and former governor of Rome, as the Italian Royal Commissioner for the Universal Exhibition. Together with Prince Potenziani, the Italian government has sent Commissioner Luigi Ranieri as architect and consulting engineer, and Mr. Liebman as Commissioner for Tourism and Navigation.

Second, it is also necessary for Italy that the people of Chicago know the truth about Italy's scientific contribution to the world. Most people believe that Italians are great artists, singers or musicians. Few people know that the most important inventions came from the imagination of Italian-born scientists. Galileo invented the telescope and discovered the moons of Jupiter, and Marconi is responsible for the invention of radio, wireless telegraphy and wireless telephony. Between these two geniuses lies a long list of inventors, including Volta, Meucci, Barsanti, Pacinotti and Galileo Farraris. Professor Enrico Bompiani, a professor at the University of Rome, is the curator of the scientific exhibition which is located in the Hall of Science. All the material from this exhibition will be handed over to the Rosenwald Museum of Science and Industry at the end of the exhibition as a permanent gift of the Italian contribution to science.

Third, the flight of the air fleet of twenty-four planes piloted by one hundred men under the direct command of His Excellency, General Italo Balbo, Italian Minister of the Air Force, from Rome to Chicago.

And fourthly, the organisation of an Italian Day at the Universal Exhibition. The day chosen is 3 August, the anniversary of the date on which Christopher Columbus left Spain in 1492 to discover this continent, America. The day includes the renaming of Inner Drive to Columbus Drive and the inauguration of the Columbus Memorial.