Overview of the US Government Pavilion - Expo Chicago 1933 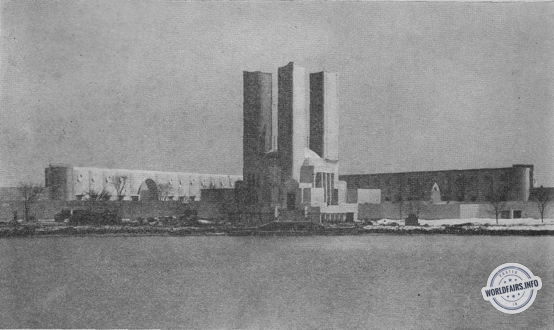 The United States Government House shows the unity of all the states and illustrates the strength of the United States in the exhibition "A Century of Progress". Instead of scattering all the different states here and there, the 1933 exhibition brought them all together in a V-shaped building with the construction of the federal government to complete the triangle.

The United States Congress donated $1,000,000 for the construction of the palace. The structure is 106 metres long and 100 metres wide. A 25-metre dome is encompassed by three fluted towers, each 50 metres high, representing the three branches of government: legislative, judicial and executive.

The western section of the building leads to a plaza on the lagoon where guest states can hold events for certain occasions.


Of the many government departments with exhibits, Agriculture, Navy, War, Treasury, Labour, Commerce and State Services are well represented. Living space is provided in the building for the United States Commissioner, Harry S. New, Deputy Commissioner WB Causey, and staff.


The States Hall is 160 metres long and 45 metres wide at its widest point.
Most of the States of the Union are present under this single roof which has allowed the participating States to present as much content as possible in one building, unlike in the past.


Michigan trout swim at the foot of a waterfall; oranges grow on the shore of Florida's lagoon; gold nuggets catch the eye in the South Dakota section; Wyoming's scenic beauty is depicted; California and its famous redwoods form the backdrop for the state's sylvan beauty; Tennessee, Indiana, Iowa, and other central and western states represent the glories found in this part of the country; Massachusetts, Maine, New York, Pennsylvania, and some eastern states tell a similar story, while Idaho, Utah, Arizona, Oregon, and others serve to show their particularities.