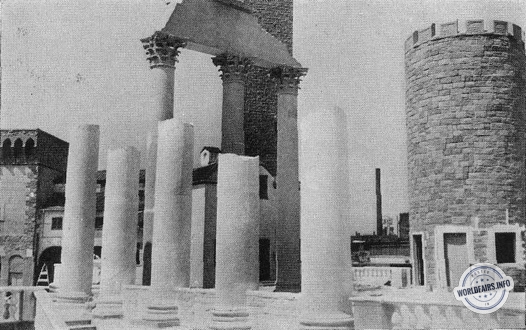 The historical atmosphere of Italy, with its heroes of the Middle Ages in the background of joy, sun and music.

You enter through a reproduction of the city gate of Signa. Next to it is a bell tower of the San Gimigano footbridge.

Nearby is a 13th century copy of Bologna's garrisenda tower.

The chief square of the village is Plaza Mussolini Benito Plaza, flanked by via Cristoforo Colombo and via Marconi. A wide ramp leads to an ancient temple of Apollo from the piazza with balustrades from which you look down onto the Cortile Balbo Italo.

The buildings along the vias are reproductions of Italian houses and shops in which various picturesque handicrafts are displayed by rakes in their traditional costumes.

Folk dances and concerts are held in the square and the adjoining Balbo Square.