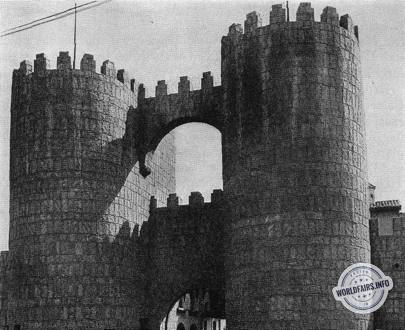 Six provinces of Spain have contributed to this village of old grey and weathered castle walls of Spain's houses that recall the grandeur of the empire that once dominated the world.

One of the most remarkable buildings is a reproduction of the famous Poblet monastery, with its tower, dating from the 11th century. This building houses the sanctuary of the Virgin of Pilar, which is visited by thousands of pilgrims every year.

The walkway between the crenellated watchtowers recalls the war with the Moorish conquerors.

Old houses, which contributed to the Moorish sovereignty and looked down on the fierce door-to-door fighting during the war that ended with their expulsion from the European continent, are reproduced in the Spanish village.

In the shops along the picturesque streets of various Spanish provinces craftsmen are seen at work.

The peculiarities of the Spanish people, their dignity and courtesy that would not desert them, whether in rags or in grandeur, are seen in this village that gives the visitor the special atmosphere of Spain.

Traditional arts and crafts, a legacy of the Moorish occupation, are visible in the shops.