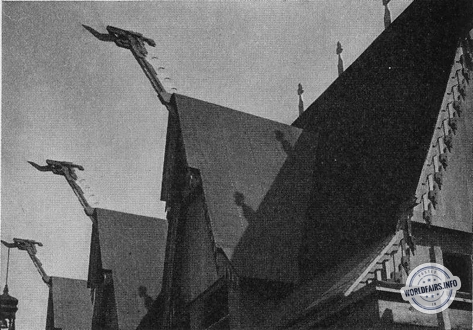 Tara's Hall, the meeting place of ancient Irish kings, potentates and bards, is one of the features of the Irish village to which fourteen counties of Ireland have contributed to present their history.

A lighthouse on the west side is replicated in a glass tower, 20 metres high, illuminated at the top. Its glowing light will be seen for miles across the lake.

The 30 or so buildings in the village range from the simplest thatched cottages to the gallery with its carved roof of beams decorated with dragon heads at the ends.

Among the historical exhibits is the Book of Kells, the oldest known history of Irish literature. It is an illuminated copy of the Gospels, in Latin, and contains inscriptions also in Irish, dating from the 8th century.

A twelfth century Irish harp is also on display.
Modern Irish industry is shown by weavers demonstrating the manufacture of Irish linen, poplin and lace in contrast to the ancient craft methods.

Dances and folk songs are given by real Irish artists where Irish music is played with bagpipes and harp brought from Ireland.