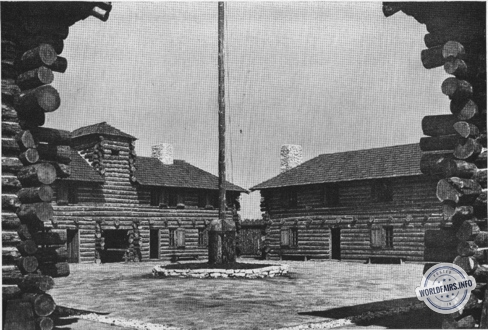 Old Fort Dearborn is an exact replica of the fortress built in 1803 that was destroyed the day after Chicago's first disaster, the Massacre of 1812.

The recreated Fort's long walls, house blocks and barracks were built at the same time as the Administration Building and the Travel and Transportation Building, and on May 15, 1931, it opened its doors.

The past becomes the present as one enters the palisade compound of Old Fort Dearborn in 1933.
Along the double rows of palisades, 2 to 3 metres high, are two blockhouses.
The two blockhouses are in the south-west and north-east corners, and loopholes in the walls allow soldiers to fire their cannons at the enemy.

Inside the palisades are also the barracks, the officers' and soldiers' quarters; the commanders' quarters on the east side, the powder magazine; the regimental shops, and the parade ground.

Rising above the whole estate, a 25-metre-high flagpole bears the fifteen-starred, fifteen-banded flag of 1812.

To rebuild the fort, Norway pines were exported to Wisconsin to be cut into logs and used to construct the palisades and buildings;

Old stone that had been left to weather for a long time was used for the fireplaces; glass that was unsaleable in 1933 due to defects was used to make the windows as it was then, and electric lamps resembling candles were used to replicate the old iron lanterns.

The interior of the fortress was also faithfully reproduced with the old four-poster beds, corner cupboard, tables, chairs and stools similar to those of 1803.

On the walls were hung tools and firearms of the time. A sword, an American regulation uniform and a saddle are prominent objects in the exhibition, while charts, historical documents and records, as well as books of the period, decorate another wall.