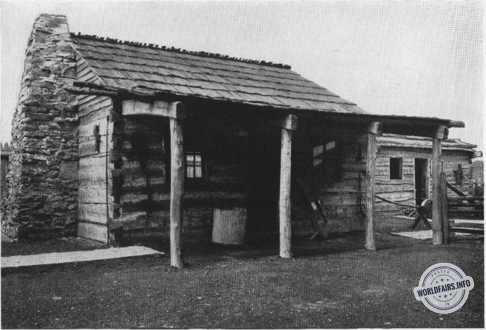 The largest building in the Lincoln group is the "Wigwam", the building in which Lincoln was nominated for the presidency of the United States in 1860.

of many national political conventions.

To the north of the group is the Rutledge Tavern, one of the most popular restaurants in the vicinity, quaint and with excellent food, and which attracted thousands of connoisseurs even before

the opening of the Exhibition itself.

The most eye-catching structure is the reproduction of the cabin in which the great president was born on February 12, 1809, near Hodgenville, Kentucky.

The cabin was built of wood brought from a house found standing in Jersey County, Illinois, which dated from the time of Lincoln's childhood.

The clay used to cement the logs, from the plastering to the fireplace, and even for the floor itself, was brought from Kentucky.

Another building in the group that is a fairly accurate reproduction is the house in which the Lincolns lived when he went to Gentryville, Indiana, when the young Abraham Lincoln was eight years old.

Although the cabin was more advanced than the one in his Kentucky hometown, it was still primitive in the extreme.
The walls, floor and roof are all made with an axe. The trundle bed for the children, pushed underneath the large adult bed during the day, reflects the primitive conditions and the need to save space.

Then there is Berry & Lincoln's general shop in New Salem, Illinois. The shop, fitted out with period equipment, is a reproduction of the small shop where the future president was an intern and student at Blackstone.

Lincoln's predisposition for writing is also well known, and originals of many of his letters show his wisdom, humour and humanity, all of which are displayed in frames on the walls.

This exhibition opened a year before the "A Century of Progress" exhibition and many ceremonies were held here, presided over by Judge Henry Horner, in honour of the American people.