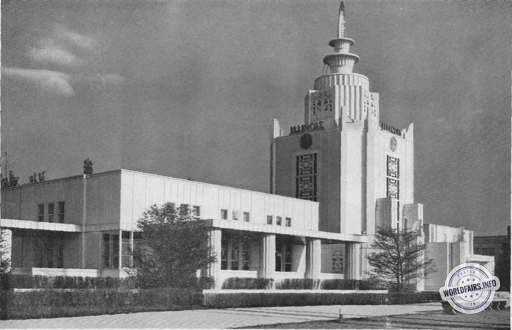 Illinois, the host state of a century of progress, is the only state in the union with an exhibit outside the State House, which is located on Northerly Island. Its duty and honor to be the host of sister and foreign countries necessitated the construction of a structure in which the honor of Chicago and Illinois would be rendered to all regions of the globe.

The high ceilings of the "Grand Hall" in the centre of the building are topped by an aluminum tower on which lights of various colours would illuminate at night. On the walls is a large mural showing colourful events and episodes in the history of the State of Illinois from the founding as a state in 1818, through "Honest Abe" Lincoln, to the present.

In general, the Illinois exhibit is largely composed of displays relating to the resources of the state as assembled by various government departments in collaboration with the University of Illinois, which has built some interesting exhibits, including the College of Medicine, which leads the way.
Common diseases and public health-pneumonia, tuberculosis, arthritis and rheumatism, hay fever, focal infections, man-animal-diseases are represented in a dynamic and interesting way so that man can follow the development intelligently. The College of Dentistry, the College of Agriculture and the State Board of Health collaborated with the doctors in setting up the exhibition.

North of the main entrance and the "Great Hall" is a corridor that leads to the hall where 300 people can listen to lectures or see moving pictures showing the progress of the state in social sciences, public welfare and other state activities. Six panels on the hall show memorable scenes in the history of the state.


Another exhibit, a memorial, which is a great contribution of Illinois to the nation, Abraham Lincoln, is in this wing of the building. Here are a multitude of "Lincolniana" and copies of the fireplace, doors, windows, wallpaper and used in the Lincoln family estate in Springfield.

Illinois, however, was not limited to exhibits at the Home; the interests of farmers are shown in the Agriculture Building, the development of natural resources, public buildings, roads, educational courses and mining are displayed in the State Room, while the advancement of social welfare, family care and recreation are located in the Social Science Room.

The Illinois Home, designed by state architect C. Hammond Herrick, associated with Perkins, Chatten and Hammond of Chicago, is 200 feet long, 100 feet deep, and is topped by a 70-foot high tower. It is a few feet south of the Sears Building across the street from the Administration Building. Translated with www.DeepL.com/Translator (free version)