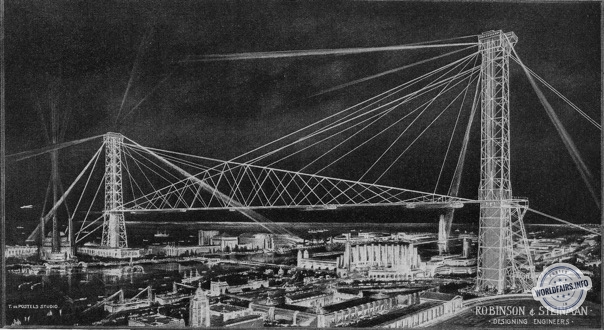 The Ferris Wheel of the Columbian Exposition was the wonder of mechanical devices in 1893. The outstanding structure of Chicago's Centennial celebration is the Sky Ride with its two towers that stretch over 620 feet into the sky.


One of these two towers is located just south of Soldiers' Field, while the other is on the lagoon between the Electric Group and the State Buildings. The 1850 foot distance between the two towers exceeds in length the George Washington Bridge cable car that crosses the Hudson River just above New York City.

The rocket cars (the passenger cabins) that run from one tower to the other have a capacity of 3,600 people per hour, and travel at a height of 218 feet, so visitors have the opportunity to see the exhibition park as they have never been seen before.

At the top of the tower are observation platforms, fully glazed, that allow the viewing of four states on a clear day. To the west, Illinois and its "Magic City" can be seen; to the south and east, Indiana and its Gary steel mills; Michigan to the east, and its sand dunes; and northward, Wisconsin and its shoreline.

Built at a cost of approximately $1,200,000, the project used 2,000 tons of steel in the construction of its towers. And 1,000 tons were used for the support cables that connect the two towers.

The testing of each element in the project was so exhaustive that visitors to the Exhibition will be able to drive through the clouds as safely as in their own cars.