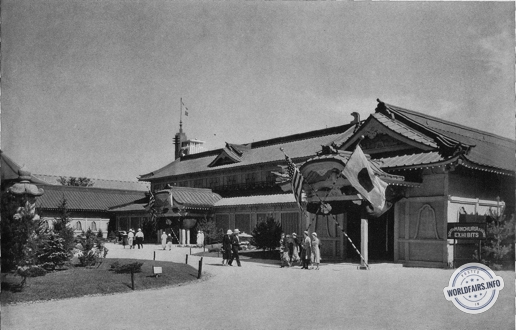 When Japan received the invitation to participate in the Chicago Exposition of 1933, "A Century of Progress", it gladly and wholeheartedly accepted the invitation in order to promote the long-standing cordial friendship between America and Japan. And in turn to further increase the inter-economic dependence between the two countries, whose shores are linked by the calm waters of the Pacific Ocean.

The land exhibits, with cherry blossoms rich in variety, consisting of industrial arts, scientific and educational posters, facilities and equipment showing the development of culture, travel, transportation, communications and miscellaneous items that are mainly exported to the United States and the rest of the world. This is followed by demonstrations of silk making, silk worming, and ending with the arrival of two delicate Japanese girls, and the tea ceremonies, an ancient cult in Japan. The art products are a collection of rare quality and occupy the most attractive and practical part of the pavilion. Among the exhibits is a model of Washington's Mount Vernon House, constructed of shells and beads at a value of over $500,000.

The culture of a country and its civilization is not an easy task to reproduce and represent in a condensed form; but, a glimpse of present-day Japan, as well as of older Japan, is possible by visiting the Japanese Pavilion.