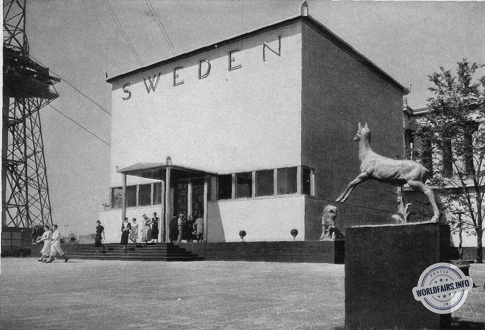 The Swedish building on the main thoroughfare of the World's Fair, a few steps south of the Illinois building, is one of the foreign pavilions that receives one of the largest numbers of visitors each day.

Magnificent examples of Scandinavian art and craftsmanship are on display in the two halls of the building, for example Swedish industrial arts, glass, porcelain, carpets, tapestries, furniture, and pewter and silver accessories.

A large part of the back room is devoted to carpet weaving. Pictures, maps and models of ships, such as the Kungsholm TMS of the American-Swedish Line and the Nyckle Calmare with which the first Swedes came to America in 1638, were displayed in the foreground of the entrance hall.
There is also an oil painting of the Crown Prince and a bronze medal of King Gustav V.

Count Folke Bernadotte, the King's nephew, officially conveyed His Majesty's greetings on Sweden's day at the World Exhibition on Monday, June 19, while Prince Charles, the 22-year-old son of the elder Prince Charles, visited the exhibition on June 1.