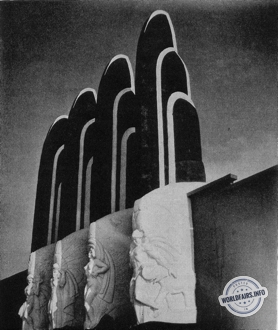 Our lifestyles from the time of dealing with the dinosaur, brontosaurus and tyrannosaurus through the ages to the present day, where we now have to deal with anthropologists, psychologists and other " log" in front of us.

Both indoor and outdoor displays are used to tell the full story of this branch of learning, which includes the above-mentioned sciences, economics and political science.

The outdoor exhibit consists of a large fan located between the 31st Street entrance and the military camp to the north. Indian groups are shown in their natural environment. We see a village with its plank houses and carved totem poles, the limited means of agriculture, the Indian teepee when living on the plains, the pueblo, the inhabitants in their terraced villages, the semi-nomadic Navajos, and the more advanced groups of Mexican Indians.

The Social Science Hall, the house of indoor exhibits, is located on the northern island between the power units and the states. It is connected to the Science Palace across the lagoon by a bridge that allows direct access from nature to the social science exhibits.

On entering the ground floor hall a central exhibition of almost life-size colonialists is visible, spinning, weaving and making clothes, drying fruit and meat, while the head of the family can be seen through the open door working the ground with his plough. The children are grouped around their elders playing games. The curtain comes down.

Then a small village with a small house containing the family from the first scene, a church, a school and a courthouse appear. A horseman and a coach are fighting on the muddy road leading from the village. The curtain is about to fall, and the scene turns.

Curtain! It's the family of 1933 with its radio, refrigerator, canned goods and modernist lighting offering a dramatic comparison to the house of a century ago.


Throughout the other parts of the building, exhibits depict the progression of man from prehistoric times to the present day. Rocks are studied, light planes show the source of man's food supply, the development of higher education is presented and other factors relevant to social achievements are represented.


The factors, which go to make up prices, costs and benefits are graphically explained, the redistribution of capital through philanthropy and taxation is represented, and the functions of the gold standard, monetary systems, exchange, tariffs and trade agreements are exposed in practical demonstrations.