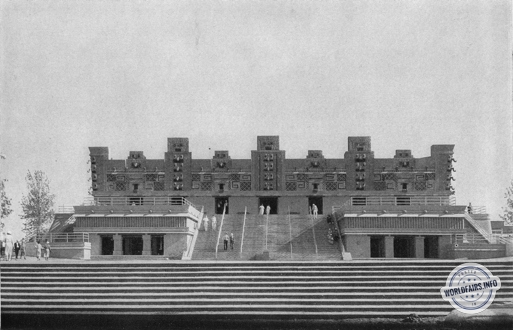 Man's achievements in America before the advent of European culture are clearly represented in the exhibition "A Century of Progress" by the Mayan Temple. It is a replica of the Convent at Uxmal, which archaeologists present as the most representative monument of the lost culture of the Yucatan civilization.

This Mayan civilisation probably originated in the hinterland of Honduras and Guatemala centuries before the Christian era. Developing slowly, it reached its peak in the 13th century with the construction of giant stone cities. Astronomical observatories were erected and art, mathematics and astronomy became highly developed with the construction of majestic temples and government buildings.

With the discovery of America by the white man, the Mayan civilization disappeared: the Spanish conquerors annihilated the rules, savagely murdered the educated classes, burned and destroyed buildings and records, and left cities in ruins.

In order to make this exhibition attractive, the exhibition officials cooperated with Tulane University by sending a delegation of archaeologists to the Yucatan to obtain data that would make it possible to erect a copy of this monument to Mayan civilization, one of the most advanced in the world until the Middle Ages.