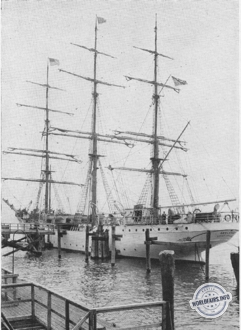 In 1893, Magnus Andersen, a young Norwegian naval captain, delighted thousands of visitors to the Chicago World's Columbian Exposition by sailing a Viking ship from Norway to the Chicago Exposition port. On June 20, 1933, forty years later, Captain Andersen, now a 75 year old veteran, was again at the helm of a Norwegian ship, dropping anchor at a new exhibition "A Century of Progress". The ship is Norway's official exhibit at this world exhibition.

Captain Andersen's ship, the Sorlandet, was welcomed on Norway Day by H. Bracks, Norwegian Minister to the United States, and 100,000 Norwegian-Americans from all parts of the country. The welcome was given off the coast of the Exposition by the yacht of Eugene MacDonald, a Chicago radio manufacturer, and the Norwegian rowing team from Chicago accompanying him.

After docking, an elaborate welcome programme, including a 400-voice mixed choir, took place at the State House on Northerly Island.


The Sorlandet, a 270-foot three-masted sailing ship, manned by a crew of 90 cadets, 16 to 18 years old, left Oslo on 29 April only with sails.
Moving images of the entire voyage are being shown to World Expo visitors during the ship's five-week stay at sea on Northerly Island. Pictorial exhibitions of Norway's progress and famous landscapes are also on board.


The ship carries a cargo of 500 sacks of coffee, 200 barrels of meat, 500 sacks of sugar, two tons of butter and other supplies for its young crew of merchant marine apprentices.