The world a million years ago - Expo Chicago 1933 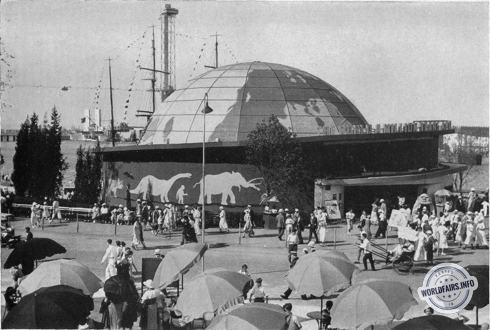 As the visitor to the World's Fair makes his way to the south entrance, he is greeted by two somewhat similar posters on both sides of Twenty-third Street. One poster features the Sinclair Oil Company exhibit and depicts the earth in prehistoric times, while the other illustrates "the world a million years ago."

The latter, located in a circular building with a gigantic dome, is one of the most interesting exhibits at the Exhibition with its revolving floor carrying the visitor through the entire exhibition without the need to walk.


The Sinclair Refinery offered realistic reproductions of dinosaurs and other prehistoric animals, approved by leading natural history museum curators, which are presented in animated scenes. The muscular brontosaurus, which in real life weighed over forty tons, was recreated in life size. Then there is the Tyranosaurus, a dinosaur and others!

In a large room to the left of the entrance, there is a trolophodon, a monkey and a tiger. All are moving as if they were alive. Then cave bears, a prehistoric deer and a woolly rhinoceros appear. Then the four stages of human evolution are presented: with Java ape-man, Piltdown man, Neanderthal man and Cro-Magnon man taking centre stage in their respective exhibits.

Looking from the centre of the exhibition, first to the right, the eye falls on the platybelodon, commonly known as the "elephant with the shovel-shaped jaw". On its back is a huge hairy mammoth that was found perfectly preserved in the Siberian ice.

Further on, a giant gorilla, a sabre-toothed tiger and a giant sloth welcome the visitor. Found intact in tar deposits in southern California, two of the groups are true reproductions of the hairy monsters that inhabited this continent before the advent of man.
At the back of the centre of the exhibition, a pteradactyl, the earliest known bird, keeps an anxious eye on the activities of anything that moves in front of it. Its broad wings flap, its eyes roll, its beak snaps.

The branches of giant palms move and suddenly the head of a brontosaurus dinosaur, the thunder lizard, appears through them, its mouth gaping and snapping. Nearby is a Dimetrodon with a Vernops in its jaws struggling for survival. Lurking behind is a triceratops, a somewhat rhinoceros-like animal.


There are many more animals, and all are animated and life-size. They all make the same sounds as when they were alive. Underneath the canvas, paper mache, fur and rubber of each of the prehistoric animals are ten engines that bring "The World, a Million Years Ago" to life.


The Sinclair Oil Company's exhibits and "The World a Million Years Ago" are of the greatest interest and contain reproductions that the Chicago Museum approves as true to life.