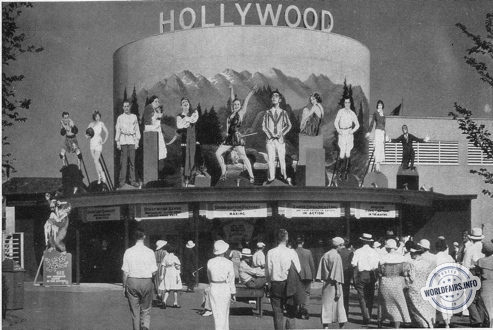 As unique and as colourful as its prototype in California, Hollywood settles down at the "A Century of Progress" exhibition. On 2 hectares on the southern tip of the North Island is the home of all that is best in film, radio and television.

Three complete studios have been installed, one containing everything for sound processing and where an audience of over 800 people can watch films being shot and recorded. Another studio, the soundproof stage, with a capacity of 2500 seats, is there for broadcasting and stage presentations of various types, including even a dance competition. In the third studio, over 400 people can watch television.

The promenade along the east and south sides of the island is dotted with beach chairs, tables, a "Brown Derby" restaurant, and a cluster of chic shops, overlooking Lake Michigan and giving the final Hollywood atmosphere needed to complete the image of this famous California town.

"Silence! Lights! Camera!" shouts the voice of the frantic director, and the actors and actresses take their roles under the dazzling light and the movie loving public gets their chance to see the making of a real movie. The favourite film stars are there, and you see them as they really are.

Government officials, foreign stars, radio and film stars, as well as people related to cinema, can be photographed every day. New reels are made and the Exhibition is publicised and in a few days the films will be shown in more than 40 countries.

The different stages of film making are presented to the public for the first time. The sound recording is done in the presence of the public, but the sound is treated afterwards to eliminate all the parasite noises generated by the crowd.