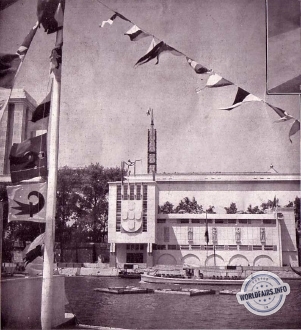 You entered the main hall where an intelligence service was installed, you found the State room devoted to the organisation of the Portuguese political regime.

Then, in the two halls of Realization and Works, the main companies were exhibited in terms of social organization, construction, port works, etc...

The Colonies room, which followed, was an overview of the Portuguese colonial domain.

A staircase led to a floor with a curious exhibition of crafts, the rooms of the main recent scientific discoveries and of the synthesis of agricultural products and finally that of Tourism. In the Salon d'Honneur, there were decorative paintings representing the most important Portuguese cities, and the statue of the President of the Republic, General Carmona.

Two boats were anchored on the Seine: a "rabelo", a boat with a single sail and a long rudder that carries the barrels of port on the Douro, where you could taste these famous wines; a "saveiro" which is the old Portuguese fishermen's boat.