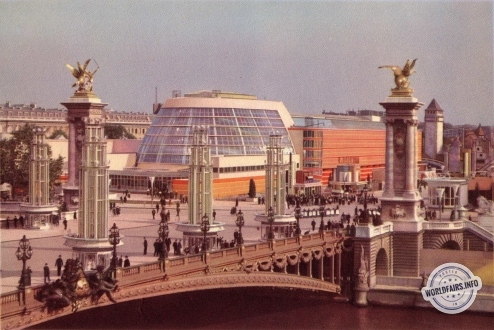 It had an aerodynamic layout in that it had a truncated cone-shaped overhang made of transparent materials that allowed you to see the aircraft lit by powerful spotlights from the Esplanade at night.

At the rear, a dome on the first floor in which, even in daylight, the most subtle lighting effects were created, evoking the atmospheric variations on the light aircraft of the Popular Aviation sections.

The main hall was dedicated to the presentations of Military Aviation and Merchant Aviation. You could go up to the first floor and sit in the cockpit of the Goeland aircraft, which seemed to be in flight; you would, looking through the windows, have the impression of flying over the new air port of Le Bourget.

The general layout had been designed in such a way that all the rooms and galleries showed the visitors the different phases of the technique in their logical order and place. Thus, fluid mechanics followed, then aerodynamics with the new installations at Chalais-Meudon, the construction of parts, which were then subjected to resistance tests and fatigue tests, endurance tests which you could attend, and finally what concerned corrosion. Everything related to air navigation was grouped according to similar rules: design and construction, superstructures, protection, guidance.

A gallery was intended to recall the most significant pages in the history of Ailes Françaises. It was intersected by two rotundas, one exalting the wartime heroism symbolised by Guynemer, the other the post-war heroism represented by the two figures of Hélène Boucher and Mermoz.

The Potez T. 3, the Morane 405 fighter and the Hanriot 182 of the school category were displayed in the great hall. There was also a giant model of the 80-seater Wibault and a number of other 3m wingspan models of large bombers and hydro-transatlantic aircraft. In the truncated section here are the latest engines. The equipment was the subject of similar presentations in the fields of electricity, radio, on-board instruments, aerial photographs.

Two advances were reserved for the stands of the Aeronautical Press on the esplanade where the monument of Aviation, a large bird hovering on a globe, was raised.