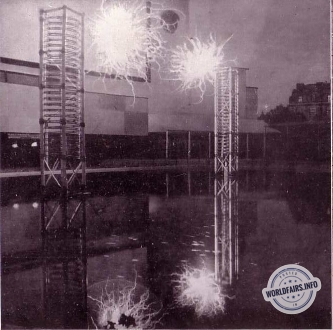 The Palace of Electricity stood at the end of the Champ de Mars. Its particularity was that it served as a gateway to the Exhibition (Gate n°23, opposite the Military School).

It was dominated by a tower bearing the new Ouessant lighthouse, which was the most powerful lighthouse in the world (2 billion candles). A long concave construction with bare walls and no openings, it included a vast hall 60 m long. On the panel, a huge fresco by Raoul Dufy, the largest painting in the world, symbolically evoked the entire history of electricity. The artist had used a new, very bright material for the painting, which was given its full value by indirect lighting.

In order to get an idea of the scale of the electrical machines used in the station factories, the hall contained four huge pieces of machinery. The hall opened onto a gallery, a real exhibition of the social role of light. One could see the means by which it was produced and transported, as well as various lighting devices, tubes, incandescent lamps and, in particular, the luminescence laboratory organised by Mr Georges Claude.

Finally, we reached a demonstration room reserved for the applications of electricity to the lighting of cities, roads, workshops and offices, and where regular light shows were given to demonstrate the infinite range of light effects.

As the Palais de l'Electricité, lit by artificial light, had no windows, the wall of the pavilion overlooking the Champ de Mars, a vast 60m long plane, constituted the largest screen in the world for the presentation of films and projections of "chromotypes", which made it a veritable Salon de peinture lumineuse.

The cabin was located underground, some 40 metres away, and appeared to be a blockhouse. This was also where the machine for another attraction was located: a large seven-metre sparkler, the largest effluent in the world, which spouted from two poles in a pool in the garden opposite the Palace of Electricity.

A luxurious guidebook provided visitors with all the details they needed to understand the important exhibition at the Palais de l'Electricité, which was built under the direction of the Compagnie Parisienne d'Electricité with the help of the City of Paris and the professional groups of the electrical energy production and distribution industries.