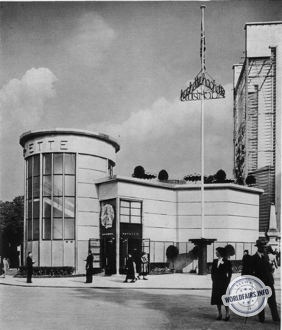 In this synthetic capital of the Universe that was the 1937 Arts and Technology Exhibition, MESSAGERIES HACHETTE did not limit its participation to the simple "representation" of a stand or a
pavilion.

Faithful to their essential role, which is to highlight and distribute all that is "printed paper", they built kiosks and sales counters in the main traffic areas-from the Concorde to the Aima and from the Trocadero to the Ecole Militaire; at the Rural Centre, as well as at the Regional Centre, at the Ile des Cygnes and at the Parc des Attractions-whose green colour - which has become a classic today - and lively displays immediately became an integral part of the Exhibition.

This network of sales outlets was completed by salesmen who, pushing light carts loaded with postcards, maps and guides, brought their active and very "Parisian" life to the margins of the grandiose setting in which they were called upon to operate from the first day.

Salesmen, saleswomen, cashiers, inspectors, deliverymen, motorcyclists, a total of more than two hundred people were needed to organise these services. Thus, MESSAGERIES HACHETTE showed what they could do in a case as particular as an International Exhibition.

What they are, how they work, could be seen in their Pavilion, at the corner of the Cours la Reine and the Alexandre III Bridge, as well as in their stand in the Palais de la Presse.
On the ground floor of the Palais de la Presse, right next to the Cabinet of Théophraste Renaudot, the patron saint of modern journalism, a "travée" had been installed, that is to say, a tiny portion of the dispatch services set up on rue Paul-Lelong - in the heart of Paris - and from which French and foreign newspapers and periodicals leave every day for the smallest of localities. The mechanical devices used to handle what, taking the container for the whole, is simply called "the paper" in the trade. Half-filled boxes, each corresponding to a sales post, counters polished by the incessant rubbing of packages, and life-size mannequins representing the handlers caught in their familiar gestures added to the accuracy of the reconstruction.

A few metres away, under a vast planisphere and behind a long counter with mahogany panelling, saleswomen - alive and well, they were - held all the newspapers and publications distributed in the country at the disposal of visitors.

A few words now about the Hachette Pavilion with its pleasant terrace from which one could enjoy one of the most beautiful views of the Exhibition over the Seine and the Alexandre III Bridge.

In illuminated windows, in the glow of nickel, were displayed all the articles offered for sale by Messageries Hachette: newspapers and publications, popular books and booksellers, luxury books and works in foreign languages, school books, etc. A little further on, there is stationery, inks in ingenious bottles, multicoloured pencils, compass boxes and watercolour boxes; elsewhere again, educational toys and various articles.

Opposite the entrance and arranged in a fan shape, three comfortable cinema rooms where three different documentary films were constantly shown: LA RUE DU PAPIER, MESSAGERIES DE LIVRES and LA PAPETERIE AUX MESSAGERIES HACHETTE. For many months, the public enjoyed the spectacle of the three parts of this moving triptych: the making and distribution of a newspaper; the birth, distribution and sale of a book; and the manufacture and distribution of stationery.

On these screens, every day, the life of the press and publishing industry, hitherto little known to the general public, was exposed. From the newsroom to the lorries, cyclists and criers; from the writer's office to the bookseller's window, from the raw material to the object presented to the buyer, passing through the printing works, the publisher's offices, the factory and the craftsman's workshop, the soberly modern architecture of the "Javel" annex of the Messageries Hachette, the Subscription Services of the rue du Sentier, the 52 Parisian annexes, etc.

These three films reveal to the public all the effort, ingenuity and organisation required to manage to "get out" a newspaper, to present the latest "just published" issue, to put a box of stationery or a pen on sale. A novel with many episodes and a thousand and one images, but also a precious "documentary" with its singularly eloquent figures: 8,000,000 daily newspapers and periodicals distributed every day - 160,000 tonnes of printed matter "processed" every year - 44,000 sales posts - daily still: 325 trains used; 428 cars covering more than 23,000 kilometres; 397 cyclists; 22,000 invoices, 11,000 letters received or sent and, to ensure this enormous volume of work: 8,397 employees.

Such figures suffice without further elaboration to express the amount of effort spent by MESSAGERIES HACHETTE for the dissemination of world information and intellectual culture.