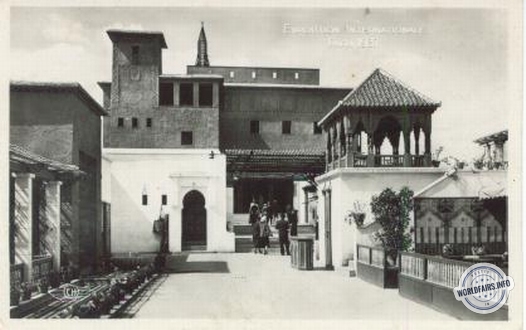 A main building, in which the objects made in the country were displayed, stood out from the whole section.

The central part, consisting of a raised ground floor, was a large covered patio, reserved for parties and conferences. The exhibition rooms opened onto this patio, which was decorated with carved woodwork and a moucharabieh balustrade.

On the side of the central promenade of the island were the annexes, which were accessed by a monumental staircase. On the opposite side was a screen for projections.

Each workshop was decorated according to the trade that was practised there. It was in Morocco itself that native rakers had made the woodwork for the fronts and awnings as well as the window grills.

Cornices made of green tiles from the country, light and rustic wooden pergolas, followed others more massive made of Salé earth or masonry covered with plaster which supported vines or climbing roses.

From the top of the pavilion, topped with a kouba of tiles and woodwork, you had a magnificent view of the banks of the Seine, overlooking the Moorish café.

Arab music, jesters and other native attractions evoked for you this empire so close where European civilization never wanted to destroy ancestral traditions.