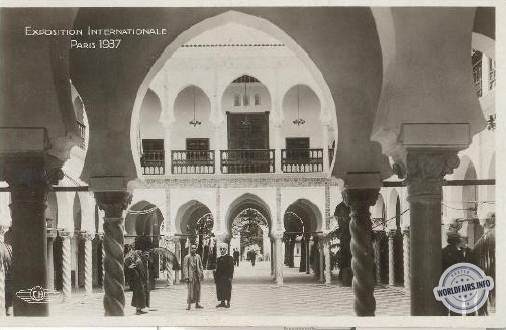 It formed a homogeneous whole although it was actually made up of three distinct parts: the 18th century barbarian palace with its large arcaded courtyard, the courtyard of a caravanserai, and an Arab town alleyway that ran around the face of the palace.

This courtyard, which you entered first, was enlivened by a water fountain falling into an onyx basin and turned out to be a reproduction of the courtyard of the Archbishopric of Algiers.

Then under the arcades were the stalls of the craftsmen exercising their trade.

All these various small works were in honour in Algeria where the natives embroidered, spun, wove, turned pottery according to the Kabyle fashion, worked with copper and wicker, chiselled delicate and openwork jewels. Even in the southernmost territories, in the M'zab for example, the art of jewellery making was practised, while the White Sisters and White Fathers devotedly taught carpet and leather making.

Through a gate, an exact reconstruction of the Bab-Azoun Gate, flanked by two posts of janissaries in the costumes of the time, you now entered the courtyard of the caravanserai. Three tents were erected there, that of a nomadic chief, that of a Targui and that of an esparto weaver, which you could see at work while the short-woollen sheep from the south were waving and bleating in the vicinity, and the barbed mehara were stretching their inflexible necks.

It was all the bustle of an Algerian stopover. This hustle and bustle continued in the alleyway lined with flying stalls offering to your eyes the range of fruits, early fruits and all the edibles, produced only in Algeria.

The restaurant overlooked both the caravanserai courtyard and the Seine. On certain days, in a special room, conferences and documentary films were held.