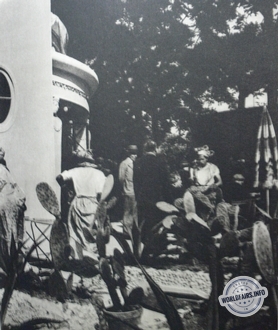 Martinique, next to those of its sister colonies Guadeloupe and Guyana, erected its pavilion which carried to Paris the impression of fresh and smiling grace, the perfume of this island of the Antilles.

The fishing nets which decorated it, recalled the "marine" activity of the population, its trade and fishing industry and also an aspect of the local crafts.

In its elliptical entrance, a diorama reproduced the most beautiful sites of the island. In the adjoining room, paintings and large-scale photographic documents showed the links that have united the Martiniquais with France for nearly three centuries.

Another room displayed the most varied of specifically Martinican productions, from lacework to fruit and roots presented in the large baskets still called "Caribbean baskets" because they were still made using the same method as in the 17th century.

Finally, in a small room in the shape of a hemicycle, charred objects, twisted by fire, evoked the terrible catastrophe of Saint-Pierre, while the photographs showed, at the foot of Mount Pele, the reborn city.