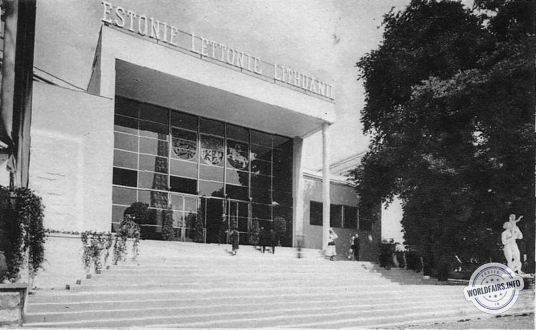 The Estonian, Latvian and Lithuanian pavilion, which visitors entered through one of its three doors, each topped by one of the emblems of the three Baltic States, symbolised friendship, union and solidarity through the monument placed in a single hall.

The three rooms that opened up to it were decorated in the national colours of each of the three countries.

Between the silver walls of the Estonian hall, dotted with black and blue details, were presented, between three high sculptures, carpets, ceramics, fabrics and paintings, as well as a demonstration of the coal shale that played such a large role in the country's economy.

In the Latvian room, with its beautiful red parquet floor and white walls, decorated with an equestrian statue of the President of the Republic, Mr. Karlis Ulmanis, the panel in grisaille that drew the visitor's attention was about the development of the Latvian people in recent years.

In this room there was oak furniture, a national-style carpet of flowers and greenery, various specimens of decorative and folk art, and information about spas and beautiful sandy beaches.

In the centre of the Lithuanian hall, a Christ carved from an oak tree was inspired by the style of the countless crosses and figures lining all the roads in the country.

The carpenters from Kaunas had made the inlaid parquet floor so characteristically Lithuanian. Canvases and two large display cases with interesting art objects completed the exhibition, which was dominated by the bust of the President of the Republic, Mr. A. Smetona.