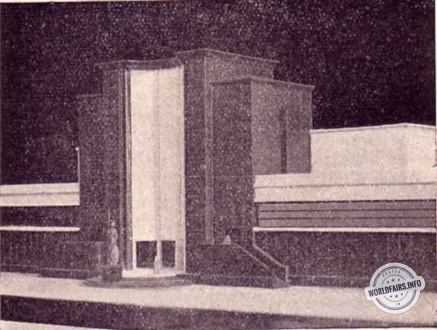 Designed in a deliberately sober style that was in keeping with the lofty nature of the exhibition it housed, the pavilion of Education had a concave section over its entire height occupied by the three entrance doors surmounted by three bas-reliefs summarising artistic, technical and general education.

On the ground floor, in rooms grouped around a central hall, there was technical education at all levels and artistic education at all levels. The galleries on the upper floor were also assigned to these two types of education. The whole of technical education was divided into six rooms occupied by mechanical arts, furniture arts, building arts, graphic arts and textiles. A series of lectures and extensive documentation introduced you to the complex issue of industrial technology. The exhibition of artistic education made you understand the role of the schools, from the higher schools of fine arts, decorative arts and in the provincial schools which had, on the walls of the galleries, a large number of drawings, photo-montages, executions in the various subjects, made either by their own means, or with the help of the technical schools to which they were closely linked.

On the ground floor, a room was also set up to clearly present the problem of vocational guidance. It contained a collection of very complete professional monographs, drawn up according to a systematic classification of all the professions in relation to a few generating centres. An ingenious lighted display board told you clearly what you could do if you pressed an appropriate button to report a mild or severe physical disability that might interfere with the practice of a profession.

On the first floor, primary education with its different sections: nursery schools, elementary primary schools, supplementary courses, higher primary schools, teacher training colleges, represented more than 72,000 schools where 145,000 teachers worked. Models of schools and classrooms allowed you to appreciate the efforts made in terms of construction and fitting out, hygiene facilities, domestic education and manual work.

An important place was occupied by the teacher training colleges, the after-school and extra-curricular activities.

On the first floor, the secondary education section had set itself the task of proving the unity of its programme, a unity which did not sacrifice one branch of knowledge to another; on the contrary, at present there was pedagogical coordination of the various disciplines and convergence of the classical and the modern for the same development of mathematics and philosophy studies.
Starting with the analysis of the pedagogical elements and ending with their synthesis, you could, by examining a series of logically arranged windows, follow exactly the cycle of schooling.

The higher education section did not limit itself to presenting its faculties and institutes, but also reserved a place for the University Cities and establishments abroad. For this purpose, a series of models showed the Casa Velasquez in Madrid, the national library in Versailles, the university campus in Nancy and the new nursing school in Lyon. In addition, artistic, scientific and historical rarities were revealed: the signatures of Villon and Montagne taken from the registers of the universities of Paris and Bordeaux, collections from the Faculty of Medicine in Montpellier with the memory of its most famous student, François Rabelais, documents by Mansard, the most beautiful pages of Delacroix's diary and manuscripts by Gauguin.

As far as archaeology was concerned, you could see casts of works discovered during recent explorations, sent by the schools of Athens and Rome, by the excavation services of Syria and Egypt, or from Saint Bertrand de Comminges.

The foreign participation was assured by Germany, Belgium, Bulgaria, Poland, Romania and Switzerland. Finally, a part of the second floor was dedicated to radiations and musical instruments.

In this educational palace, the French universities demonstrated brilliantly that nothing human was foreign to them.