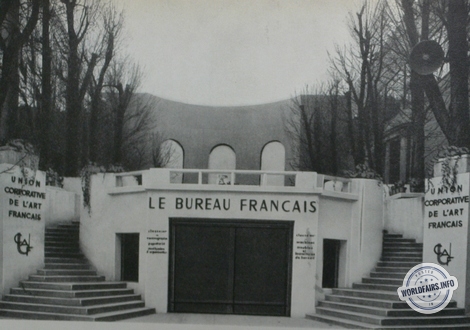 One entered a large room where the banners of the Métiers de France were hung, this was the headquarters of the Union Corporative de l'Art Français.

The aim of this grouping was to defend French art by creating a permanent link between the artists who created models and the manufacturers responsible for reproducing them.

Under the same roof was the class, sets and costumes of the Theatre.

While contemplating models and costumes, skillfully made by J. Copeau and by what was called the "cartel" which gathered the names of Baty, Dullin, Jouvet, Rocher.

In the same way you could see, next to a summary of the artistic task accomplished by the subsidised, the evolution of religious, workers' and scout theatres. A laboratory theatre with a small stage and a hall with two hundred seats was used to demonstrate the staging and was available to an irregular theatre every week.

In the courtyard of the Pavilion there was a green theatre.

The northern part, along the quay, was entirely occupied by the exhibition of fabrics.

The Rayon Spinners' Union showed not only samples of their products, but also how they were used in their applications.

A large decorative frieze showed the successive stages of the products from manufacture to use by customers. Two compartments showed the methods used by the exhibitors, one for production and the other for application.

On the wall was a large map of French artificial textiles.

On the other hand, under high columnar display cases were silks from Lyon, the Paris area and Saint-Etienne. The wools, cottons, dyes and prints were presented in a decorative way.

In the left wing, on the first floor, were the industries of yarns of all materials, as they were manufactured, milled and twisted for weaving or household use. Light colours and floral designs were adopted for upholstery fabrics which you would then admire alongside tapestries and carpets. Finally, the exhibition of lace, embroidery and trimmings proved the vitality of these very old French industries and presented them in the different uses that modern life attributes to them: sewing, lingerie, furnishing.

Still in the same area, the stands of the Mechanography and Stationery Industries were installed.

A frieze explained in an attractive way the use of mechanography and modern methods of organisation in commercial and industrial life.

The exhibitors had the opportunity to demonstrate their machines, so you could see the typewriters, statisticians, calculators, franking machines, stenographers, duplicators and checkers in action.

You could also have explanations given to you on the latest accounting methods, on the keeping of records and, in general, on the organisation of the office. Showcases were set up for stationery and office supplies.

Finally, the Gobelins factory, in the Pavillon d'honneur, presented some of the magnificent production of the last three years, some of the most precious decorations that can enrich the framework of collective or individual life. In the large monumental peristyle, here are "The Niger" and "The Mekong" after Ducos de la Haille, "Messidor" and "Thermidor" after Deshayes.

On the ground floor, in the large room, you could contemplate "Scenes of Spanish life" after Sert and two "Pastorals" after Jules Flandrin, and finally in a special room, "The triumph of peace" after Othon Friez. Other tapestries were exhibited on the first floor.