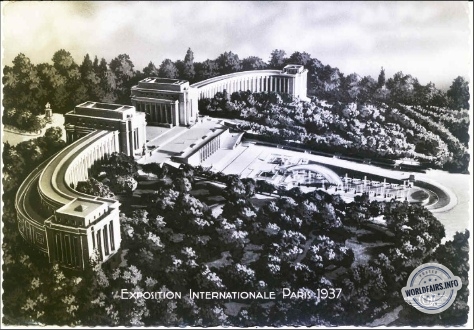 Towards the end of 1877, work on the construction of the Trocadero Palace was actively underway.

In the December 15, 1877 issue of L'Illustration we find the following lines: "If these constructions (those of the palace) have something mysterious about them, what shall we say about the immense basements or cellars that extend under the palace as well as under its wings and which, dug out of the living rock of the old quarries, have been vaulted and walled up! Part of these cellars is used for the ventilation of the hall.
Let us add that there is talk of reserving a part of these underground passages for an exhibition of... tombs.
If this exhibition lacks a little gaiety, it will be no less curious. "

It is interesting to reread the old chronicles at a time when the 1937 Exhibition has once again upset the unfortunate hill of Chaillot.

Faced with the considerable expense of moving the very important and precious collections of the museums of Ethnography, Comparative Sculpture and Indochinese Art, it was decided to camouflage the 1878 palace rather than demolish it entirely.

The new project included, among other important changes, the removal of the two towers and the large festival hall, the latter to be rebuilt below the level of the former Place du Roi-de-Rome so as to free up the admirable perspective of the Champ-de-Mars.

"Cosmetic surgery has been done", said a humorist. We will simply write here that art has lost nothing.

The realisation of this programme gave rise to extremely important earthworks and to underpinning masonry work that was complicated by the considerable loads represented by the preserved buildings, whose foundations had to be deepened.

These are the preliminary works, which have now become invisible, and whose main stages will be summarised below.

First of all, the towers and the festival hall had to be demolished. Only the central building (now razed) on the edge of the Place du Trocadero was temporarily preserved for use by the Musée d'Ethnographie.

The mass of earth that had to be removed under the festival hall represented an average depth of 23 metres and a total volume of 130,000 cubic metres.

The execution of these earthworks was very laborious, as there were many very strongly consolidated structures: on the one hand, those of the former palace of the King of Rome; on the other hand, those of the 1878 festival hall, to which the quotation at the beginning alludes.

In order to break the masonry and the banks of rock encountered, 13,000 kilos of explosives, 25,000 detonators, 8,000 metres of fuses and more than 50 kilometres of wire for electric fuses had to be used.

The preparation, execution of the blast holes and the crumbling of the blocks required the continuous use of 60 drilling machines and concrete breakers in three eight-hour shifts.

An average of 30 trucks per eight-hour shift and half a dozen mechanical shovels were used to remove the spoil; the workforce reached 288 workers.

Despite all the difficulties encountered, the earthwork for the 130,000 cubic metres to be excavated was completed in less than the one hundred and ten days prescribed by the deadline.

The wings of the old building were preserved, as well as the head pavilions; the gable wall of the old festival hall and another wall parallel to it, adjoining the Museum of Ethnography, were also preserved, but temporarily. Major alterations planned in the basement for the pavilion on the Paris side required the deepening of the walls and piers to a height of between 1 and 9 metres.

Because of the heavy loads supported by these piers (410 tons) and because of the immediate vicinity of the Museums of Comparative Sculpture, these masonry repairs underneath the building were subject to a series of delicate operations: repairs in small sections, use of large metal props blocked with hydraulic jacks, cement injections, etc.

Thanks to the careful precautions taken during these various operations, no settlement or disorder was found in the preserved buildings.

As the gable wall of the former festival hall and that of the Museum of Ethnography each remained at a height of about 25 metres after the demolition of the old building, it was necessary to deepen their foundations by means of new underpinning, the height of which varied between 10 and 17 metres, bringing the total height of these walls to about 40 metres.

This particularly delicate work was carried out in two main phases for each wall and required the use of masonry keels, relieving arches, tie rods, etc.
The load of the building to be supported and the valuable collections it contained required all kinds of safety measures, which were never breached. As an extra precaution, the earthworks that were carried out in the very hard benches were carried out only with concrete breakers and not with dynamite.

These earthworks and underpinning works were carried out under the direction of Messrs Carlu, Boileau and Azéma, chief architects of the government and winners of the Grand Prix de Rome.