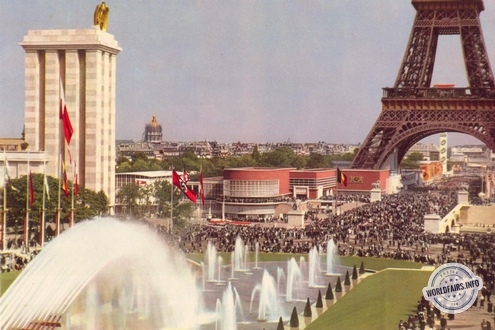 The new fountains (designed by Messrs Expert, Thiers and Maître, the government's chief architects) which run from the entrance to the new theatre to the Avenue de Tokio represent a total excavation of 80,000 cubic metres.

As with the previous ones, these earthworks were completed, despite the difficulties encountered, about ten days ahead of schedule.

It is fair to note that this important work was entrusted to a large French firm which, on many other very delicate occasions, was able to provide abundant proof of great mastery of execution combined with two other very valuable qualities: the extreme concern it takes for the safety of its workers and its point of honour of always being punctual.

This is the Billiard company, 39, rue Washington in Paris

From the steps of the terrace, you have already contemplated the enchanting spectacle offered by the marvellous fountains of the Trocadero Gardens, without doubt the most beautiful in Europe.

The layout of the land dictated this play of successive water mirrors designed to make up for the difference in level between the first steps and the Pont d'Iéna.

Visibility has been studied in all its aspects so that the walker can enjoy the whole composition from any point.

Take a moment to consider it. You will notice that it has two main levels: the lower level is made up of a canal running from one end to the other and measuring 110 metres long and 20 metres wide, set in hard stone and lined with carved yew trees, and the upper level is made up of superimposed basins and basins.

The total surface area of these fountains is 25,300 square metres. The parabolic jet that springs from the central niche has a 45-metre span in several layers. It is accompanied by vertical and inclined sprays, distributed along the entire length of the canal, while secondary sprays join the basins and basins in the upper part. The general flow rate is 2,500 litres per second and the power of the engine room is 1,500 Kw.

The architects who realized this masterpiece of water effects that you could not come back to admire in the evening illuminated by a fluorescent lighting, are MM. Thiers, P. Maitre and R. H. Expert.

The Trocadero Gardens, which extend their foliage on both sides of these fountains, were reserved for the foreign Sections that you could still find on both banks of the Seine near the Pont d'Iéna and at the Champ de Mars.

The Exhibition had grouped them in this way to give them a place of honour in the main axis of the general plan.

Many of these pavilions had a restaurant, café, tea or bar serving national food or drinks. Many also hosted film screenings, lectures, music or dance performances, etc. At the end of each description, a summary note provided all these indications.