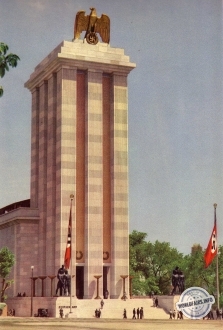 The German Pavilion was built over the Tokyo Pier subway.

Its 54-metre-high tower, crowned with the Reich emblem (an eagle with a swastika), was made up of eight steel pillars clad with fluted stone slabs and complemented by mosaic plaques.

After climbing the staircase protruding from the platform on which the tower rested, you entered a single hall with a steel frame.

The decoration of the walls, following a uniform plan, gave it the appearance of a festival hall.

It was beautifully decorated with mosaic frescoes, tapestries, art paintings and stained glass windows, all of which, like its monumental bronze groups, were the work of the best contemporary German artists.

The hall, which had no subdivisions, floors or other structures, was lit exclusively by the large roof window and numerous chandeliers, with no windows in the side walls.

Only the rear part, slightly elevated, had a mezzanine floor where offices and the cinema room were installed.

The stairs leading to the terrace began here.

In this huge hall you could see, next to the models of the great constructions of the new Germany, the first-class productions of the industries of this state and especially of the different branches of the arts and crafts, of publishing and books.

Everything was presented with consummate artistry and remarkable order, in accordance with the overall plan drawn up by Mr. Woldemar Brinkmann, the well-known Bremen architect, who has collaborated usefully with the eminent professor Mr. Speer, author of the pavilion, made famous by his creations in Nuremberg for the annual congresses of the National Socialist Party, and who has recently been entrusted with the design of the new Berlin.