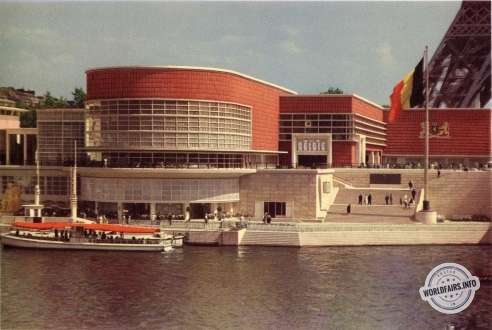 The façades were clad with terracotta and ceramics combined with copper.

The official pavilion, at the corner of the Pont d'Iéna and the Quai, opened onto a hall of honour with walls panelled in black Belgian marble, on which four large tapestries, woven in Mechelen and executed after cartoons by Jesper, R. Strebelle and Sander Wynants, stood out. The theme of these tapestries was religious: the famous procession of the penitents of Veurne, which dates back to 1445 and depicted the Passion; Herod was shown next to local types such as the doughnut merchant; a joyful synthesis of the Antwerp and Brussels "Ommegang" in which saints and giants were mixed; the pursuit of Saint Evermère, the Walton procession of the Car d'Or of Mons where you could see Saint George slaying the dragon, in the middle of the Borinage, in the midst of the "chinchins", wild devilish men in leafy clothes.

In this sumptuous great hall, you could also admire a decorative panel in copperware: "Monument au Travail", the work of the "copères", a familiar name that the inhabitants of Dinant were still proud to bear.

It is a hymn with hammers dedicated to "poor labour".

This room was followed by a winter garden containing an exhibition of floral art in Belgium.

In the rotunda, which overlooked the Seine and whose mosaic floor was made of Congo wood, were displayed masterpieces of the craft and art industry, dazzling lace, crystals from Val St Lambert, enamels, bindings, ceramics, religious art and luxury furniture.

The pavilion located at the foot of the Eiffel Tower grouped the semi-luxury products. Behind it was the Belgian Congo pavilion (architect: Petit) where the works of this great colony were exhibited.