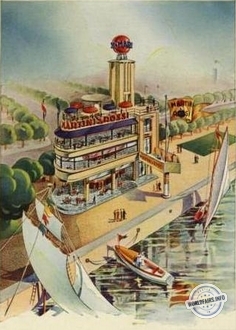 The Société Anonyme Française MARTINI-ROSSI (S. A. with a capital of 16,000,000 francs, fully paid up) achieved a magnificent and just success with the Pavilion it had built on the banks of the Seine, which was visited by the crowd of Exhibition visitors.

In a charming setting, they were able to taste and appreciate the products of the famous MARTINI-ROSSI house: this MARTINI vermouth which was the first to be introduced in America, before conquering all the other countries, and whose remarkable perfection is due to the quality of the wines used in its manufacture.

And also the ROSSI aperitif, a gentian tonic that is absolutely harmless (a marvellous quality that distinguishes it from too many artificially flavoured preparations), and whose refreshing and pleasant taste quickly won the sympathy of visitors to the MARTINI-ROSSI Company's Palace.

The company has always made it a point of honour to present only first-class products to the public. The success of MARTINI-ROSSI at the Exhibition is the just reward for this effort.