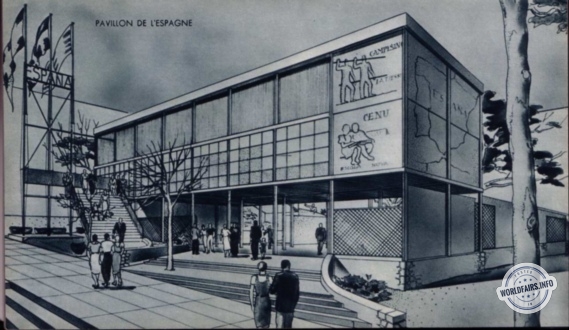 The Spanish pavilion stood on the edge of the central avenue.

Its very modern appearance was enhanced by sober and judicious ornamentation.

You could access, via the large staircase, an open hall which extended into a patio intended to be used as a theatre.

A compulsory circulation system allowed you to begin your visit to the rooms on the second floor, which housed the sections of popular architecture and crafts, painting, sculpture, engraving and drawing.

An interior staircase led to the first floor where the sections of Economy, Labour, Popular Education and a large map of Spain were located.

A special decoration on the façade was used to display advertising for the products of the various provinces.