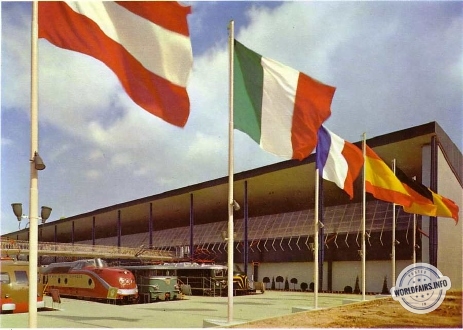 The exhibition presented by this group was spread over different levels, one at ground level, the other about 5 m high on a walkway at the back of the pavilion. The raised patio was set up as a place to relax.

This participation was dominated by two elements.

An abstract composition made of metal and suspended from a 44-metre long beam schematised the major stages of aviation: the dream of antiquity, aviation in its early days, the present and the future... In addition, a 20 m long and 8 m high map represented the worldwide network of Sabena.

Would you like to travel? The route of your wishes was drawn on the illuminated map; a commentary and slide projections illustrated your journey.

From the entrance you could follow the various presentations, including two jet engines.

You could see the role played in Belgium by the Sikorsky helicopter, which was permanently on the Exhibition's heliport.

The aircraft of tomorrow... was presented to you as the result of a technique whose constant evolution
had allowed the realization of the aircraft in service on the Belgian commercial lines.

Here is a model of the last born of the French genius "La Caravelle II" and of the helicopter "Alouette II".

Enter the first class compartment of the Boeing 707, one of the first commercial jet aircraft.

Presented by the Régie des Voies Aériennes, a radar control centre was actually in operation and monitored the entire Belgian airspace west of the Melsbroeck meridian.

The landing and take-off of aircraft on a model of the Brussels aerodrome was commented in four languages.

Continue your visit and you can see more models of other airfields used by Belgian airlines and an elegant glider on the ground.

And if you wanted more detailed information on aeronautics, you could consult the magazines in the documentation centre or watch the films.