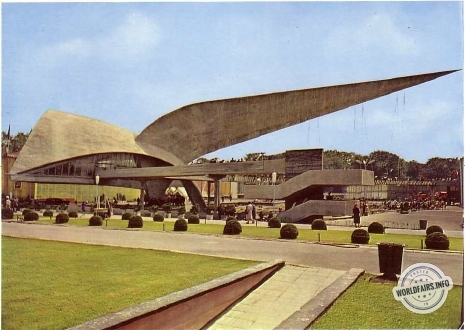 Inspired by the theme of the Exhibition, this group wanted to show how and to what extent civil engineering acts on nature, transforms it or disciplines it for the greater good of Man and Society.

The central element of the demonstration was an open-air relief map of Belgium.

It gave a striking idea of the complexity of the activities involved in construction and the importance of the role it plays in economic life.

This map was flown over at a height of five metres, by a footbridge which had no support on the ground but was suspended from a spire rising - at 36 m from the ground - in an audacious 80 m long oblique cantilever.

To counterbalance the spire, a domed hall was also built as a cantilever.

The whole system was balanced on a central foot with two crutches.

In the large suspended room, there was a collective didactic presentation by the Belgian civil engineering group.

At the opposite end of the spire, the suspended footbridge gave you access to the exhibition hall with the presentations of the themes: road-water-lighting and motive power.

The whole exhibition was complemented by a presentation of company equipment which highlighted the important role played by contractors in the construction of engineering works for the benefit of the human community.

An important place was also given to construction materials, and in particular to quarry and cement products, which marked the presence of the Mining, Quarrying and Limestone Industries groups, chaired by Mr. Jules Plaquet.