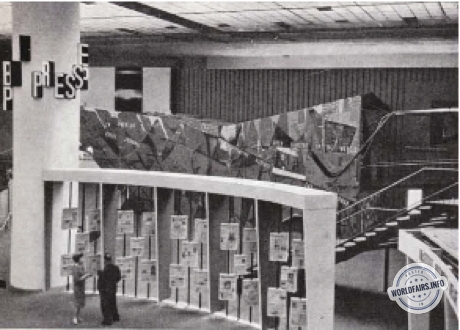 The beige press group divides its various themes along four corridors forming a large X, the centre of which is a small square with a state-of-the-art newsstand.

In this square, you see before you the double stand reserved for the Belgian daily press and the periodical press, whose background - an unfolded newspaper of giant dimensions - opens the windows of current events.

It hides a tunnel which you enter through a tilted plane in which an ensemble of sound and light allows you to witness the birth of the event leading to the news: the dramatic sinking of the Italian liner "Andrea-Doria".

You then see how the news is followed by the writing, composition, production and distribution of the newspaper, whether it is a daily or a periodical.

From this tunnel comes an endless chain of newspapers that circulate in the stand. The contribution of the press to human relations, its role in the dissemination of technical progress, its civilizing and social progress action are successively highlighted, while a miniature rotary press distributes the souvenir visiting card to visitors and several screens give the latest information and news of the day.

The economic importance of the press in Belgium and its contribution to the development of free enterprise is the central theme of a new joint press stand in the same square opposite the large print media stand. In small, modern display cases, the various requirements of press advertising are presented in a witty way.

Along the entire section devoted to information, a Bellino central receives and transmits photographs, while the Belga Agency works before your eyes.