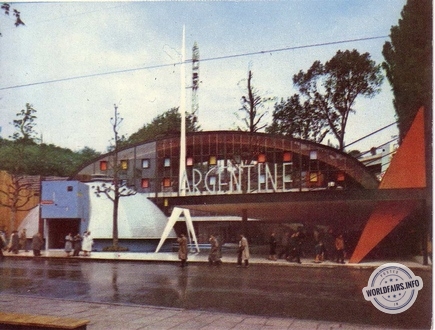 The architecture of the pavilion, conceived according to avant-garde techniques, could be described as lacustrian.

The central part of the building stood on four points above an irregularly shaped artificial lake.

The aesthetic effect of this construction was accentuated at night by underwater illuminations.

On the avenue in front of the site, a spacious gallery opened up, in which you could walk through the first exhibition.

At the end of this gallery, a staircase led you to the first floor, which was cut off in the middle by a transparent panel. This panel limited your visit to only one part of the exhibition, the second part being to be visited by coming down from the 2nd floor. A bridge allowed you to access the last circular exhibition room.

In these different rooms, you could get in touch with the Argentine nation, which displayed the products of its main industries: leather, textiles, agriculture, food, metallurgy and mining.

The sciences and the arts occupied a space of 100 m2.

Under the main pavilion, a glass cylinder was occupied by the restaurant.

At this typical "criollo", installed on an island, you could taste Argentine dishes and appreciate the quality of the meats, fruits and wines of the country.

You could also appreciate the tourist beauties of the Republic of the Plata River by attending the projection of documentary films about the Andes, the Tierra del Fuego and the pampas with their infinite horizons.

These screenings took place in the cine-auditorium, built on the island.

The exhibition in the Argentine pavilion was a manifestation of the technology and culture of modern man.