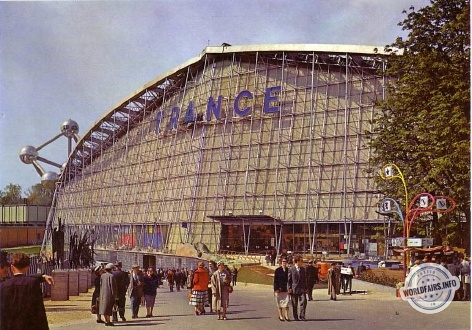 A technical feat, this pavilion of 12,000 m2 balanced on a single point was also the materialization of the humanist theme chosen by the Exhibition, which particularly appealed to France: "Technology in the service of man".

It is representative of the aesthetic and daring qualities of the French race. Its realization being by itself an absolutely original solution of the problems of balance, prefigured the future.

The presentation followed the man in the divisions of his daily existence_ You could see first of all "the man at work" whether in large industry, or in the craft industry, in the factory or on the farm; then "the man at rest" in his home, in the communities of the neighbourhood, or finally, as a citizen of the nation.

In this country with a strong intellectual tradition, the word "leisure" means "thought", which is why French thought was studied here in its formation, in its means of expression and in the results of its research. It was and remains the richest contribution that France made to the world.

As a country with a global vocation, France presented in the last section its overseas achievements, its civilising work and the way in which it has made available to mankind natural resources which, without its intellectuals and techniques, would have remained dormant for a long time.