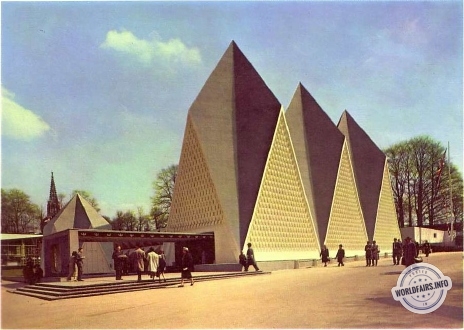 The British Government Pavilion, with its three curious prismatic towers, presented the splendour of glorious traditions on the one hand, and the strange aspects of the atomic age on the other. A diorama gave you an insight into the reality of research into the peaceful applications of nuclear energy.

The technology hall presented the pure and applied sciences from the point of view of the human values that are the basis of man's technical achievements.

Further on, an animated panorama showed in a humorous way the British people at work or in their favourite pastimes.

The next section highlighted Britain's role in the long struggle for freedom by leading its dependent peoples to self-reliance.

The British Industries pavilion, built by the Federation of British Industry, covered an area of 6,000 square metres and showcased the most notable contributions of British engineering to the material progress of mankind.

The raw materials section focused on the application of scientific processes to industrial materials. The Power and Energy section provided a striking comparison of energy production by conventional and commercial nuclear power stations.

The following sections were devoted to industrial technology and consumer goods.

A special stand was reserved for the City of London, the historic centre of a trading and financial system that now spans the globe.