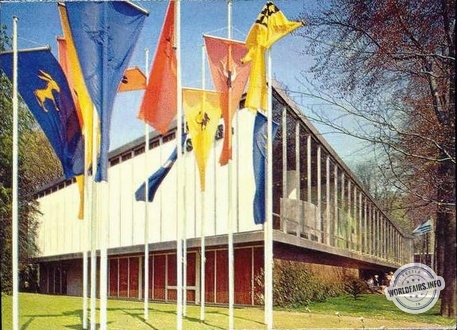 The Israel pavilion attempted to illustrate in a modern graphic style the dramatic story of a state under construction, of a people taking shape. It placed them in the perspective of the ancient history of the Jewish nation, of the people of the Bible who returned to their homeland after the vicissitudes of an exile that lasted almost two thousand years.

The exhibition brought to life for you the heritage of ancient Israel, retraced before your eyes the picture of the Dispersion, and allowed you to grasp at first hand, in all its picturesque exuberance, the contemporary history of the State of Israel.

Special features presented it to you," as revealed in the work of the desert pioneers; the laughter of children and the joyful dances of a youth creating its own traditions; the conquest of arid spaces.

For Israel, 1958 was also the tenth anniversary of its existence; the young state celebrated this jubilee by offering the world a unique example: that of a democracy built in the spirit of the ancient Hebrew prophets, according to the techniques of modern science.