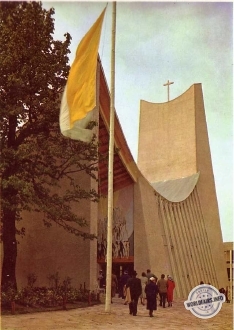 In the heart of the foreign sections, the "City of God" presented the Catholic conception of "man and his happiness", which is the origin of many Catholic activities that were also highlighted there.

From the very beginning, you were confronted with the problem of "man and his happiness" as it exists today, - with the partial and ephemeral solutions that are given to it on all sides.

Then comes the right Catholic answer, which is based on faith in :

-God who created us in his image and likeness,

- Jesus Christ, who as God and Man lived among us, died and rose again to show us the meaning of life here below in relation to eternal destiny,

-The Holy Spirit, who in the Church continues the redemptive work of Christ.

In the various rooms, the emphasis is on: our dependence on God:
- the example of Jesus Christ;
- the resurrection of Christ;
- the Church as a hierarchical society, to which Christ entrusted his means of sanctification.

On the floors, the Catholic activities that were all marked by this faith were illustrated, such as
- evangelisation of the world and charity,
- social doctrine in the national and international sphere;
- education, arts and sciences,
- the press and the sciences of opinion.

The Catholic conception of "man and his happiness" still exerts a great influence in the various sectors of human activity.

This was reflected in the meetings held in the large Congress Hall.

The pavilion was the joint work of 52 countries.