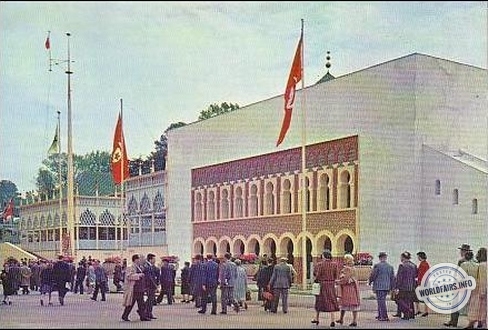 To evoke Tunisia is to irresistibly evoke Carthage, its naval supremacy which made it the feared rival of Rome, the Punic wars, the exploits of Annibal, the historic battle of Cannes.

It also means evoking Christian Carthage, with all the geniuses it has given to humanity: Tertullian, Saint Monica, Saint Augustine, Saint Cyprian.

You know the famous phrase: "I am a man and nothing human is foreign to me". It is by Terence, the Carthaginian poet.

Finally, it is to evoke the brilliant period of the Arab conquest with its extensions in Europe, the Andalusian civilisation, the Arab kingdom of the Two Sicilies and the School of Salerno, starting points of the Italian Renaissance.

There are so many names to mention among scholars, scientists, historians and researchers! The most prestigious of all is certainly Ibn Khaldoum, founder of sociology, historical criticism and modern political economy.

The theme of the Tunisian pavilion, "The Tunisian in his daily work, in his contribution to the progress of science and art, in the realisation of his ideal of justice and freedom, in his leisure time", made you know and love the country which could adopt as its motto: "Young nation, old civilisation". You could appreciate all the refined charm and delicate hospitality.